AL PERKINS is perhaps best known for his timeless pedal steel guitar work, which has graced some of the most notable recordings of the last half dozen decades. However, this Grammy-winning multi-instrumentalist and producer, who was honored with the release of a signature model Dobro by the Gibson Guitar corporation, has also been generous with his time and expertise, recording and performing with a wide range of up-and-coming artists.

Whether it be rock, pop, country or bluegrass. Gospel, folk or Americana, Al Perkins has helped shape the musical tapestry of America. 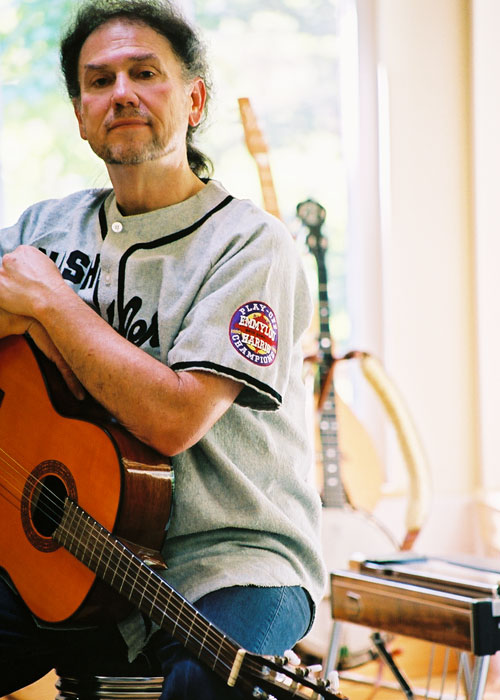 This legend of popular music was born and raised in Texas and learned to play Hawaiian steel guitar at the age of 9. Playing in West Texas bands throughout the sixties, it wasn't until his discovery by Mickey Jones & Kenny Rogers of The First Edition, and release from the US Army Reserves in the early seventies, that his musical career took off with the country rock band Shiloh. Perkins found himself hired to play pedal steel and lead guitar in the new incarnation of The Flying Burrito Brothers, and recorded the seminal live album The Last of the Red Hot Burritos in 1972. The band splintered, and Perkins along with former Byrd, Chris Hillman, joined Manassas. Led by Stephen Stills, they were one of the most talented units in music at the time. Equally at home with Latin jams, rock, blues, country, folk, and bluegrass, Manassas was one of the most versatile outfits in rock history.

As the second album was released and Stills was being drawn more towards his work with Crosby Stills and Nash, Perkins and Hillman found themselves joining up with Richie Furay (Buffalo Springfield and Poco founding member) and J.D. Souther, forming the Souther Hillman Furay band. Perkins moved into producing records in the mid 70s, but did tour again with Michael Nesmith, Debby Boone and McGuinn & Hillman. He managed to also continue working as a session player, contributing to many of the notable album releases of that time, including the Eagles' On The Border. Continuing his production work into the 80s, Perkins also toured with Chris Hillman as a duo which later developed into the Desert Rose Band. In 1986 Al toured and recorded with Dolly Parton for several years before moving to Nashville in 1989.

It was in Nashville he reunited with Emmylou Harris on a new project called the Nash Ramblers. Al previously worked with Emmylou on Gram Parsons' two solo albums. (It was this association with Parsons that led to Perkins being called in to play on the Rolling Stones' Exile on Main Street album). Emmylou and her new band, obviously inspired by the history of the famous auditorium, responded by putting together a stunning live set spanning the history of country music. The album, Live at the Ryman, was to win a Grammy award in 1992.

Al has played and toured with artists as diverse as Bob Dylan, Cher, Rita Coolidge, Dan Fogelberg and Dwight Yoakam, and has performed with long-time associate Chris Hillman, and veteran country singer Michael Martin Murphey. A personal highlight of Perkins' long career was his appearance on stage alongside James Burton and Keith Richards and a host of stars at the Gram Parsons tribute show in California in the summer of 2004.

Somehow in his busy schedule, Perkins managed to find enough time to put together a collection of studio outtakes and rare recordings spanning the breadth of his career. His Snapshots album is a fascinating project that chronicles his time with various musical associates with long lost or forgotten recordings by the Nash Ramblers and the Burritos, among others.

Triple Play was Perkins' first solo album of his own music, a project that effortlessly swings through his blues, country, bluegrass, gospel and even Cajun influences. The enjoyment of being able to cut loose on his own self-penned material is clear, with Triple Play featuring an infectious set of studio and live cuts.

Big Dog 3 is a 'Power Trio' featuring Emmylou Harris alumni Brady Blade and Chris Donohue. The self-titled album pays homage to the band's musical heroes, with a selection of well-chosen cover versions and original compositions featuring Perkins' warm and engaging bluesy vocal. Of course it is fitting that musicians of this calibre can call on the services of a few special friends for this type of project, so contributions on the album include vocals from Emmylou Harris, Jim Lauderdale, Jerry Salley and Kristine Arnold, alongside other notable guest artists.

Today Al Perkins continues to record as an in-demand session player, and is highly regarded for quietly sharing his time and expertise to help develop the careers of many artists.

What others have said ...

"You play a style like no other ... and very soulful!"

"He is the best country-rock guitarist I've heard!"

"... Al Perkins could play a pedal steel and sound as good as every great guitar player alive ..."

"The most influential dobro player in the world."